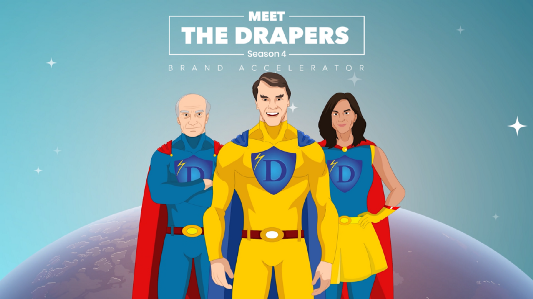 Meet the Drapers, Brand Accelerator Season 5 is finally underway, and that can only mean one thing — entrepreneurs from all over the world can now apply for a chance to pitch in front of Silicon Valley’s top venture capitalists, including Tim Draper!

Now you’re probably wondering, how can being a contestant on Meet the Drapers help your business? Lucky for you, we’ve listed 6 reasons for why pitching on Meet the Drapers is the best thing you can do for your startup.
Pitch in front of prominent Venture Capitalists

Being a part of Meet the Drapers means your business can get investment from venture capitalist Tim Draper. He’s invested in more than 30 unicorns including Hotmail, Skype, Tesla, SpaceX, Baidu, Twitch, and Bitcoin, and has several venture capital firms dedicated to investing in the next billion-dollar idea. He even started Draper University of Heroes to invest in entrepreneurs to accelerate their ideas & breed innovation. Last season, Tim Draper invested $500K to the grand prize winner and in total, invested $1.6 million to contestants. Another prominent venture capitalist on the show is Tim’s father, Bill Draper. Known as a pioneer venture capitalist, he brought venture capital to the west coast in the 1960s, and played a large part in investing in the Silicon Valley we know and love today. With decades of experience in investing and connections in Silicon Valley, these are the VCs you want to get your company in front of.

Unlike other entrepreneurial reality tv shows, everyone on Meet the Drapers is a winner. While a contestant may not make it to the semi-finals or finals, all contestants can raise investment through their crowdfunding campaign. Viewers can invest in companies from their couch! Contestants raised over $2.5 million dollars during season 4, and over $11 million total across all four seasons. On Meet the Drapers, you can raise funding for your startup just by being a contestant, and that’s pretty cool if you ask me.

With over 9 million viewers last season from the US and India, Meet the Drapers gives your company brand recognition globally. With your business and its vision broadcasted internationally, your company will get the exposure it needs to gain customers, investment, and partnerships without hiring a branding agency, which can cost from $5,000 to $20,000 a month for startups. Pitching on Meet the Drapers allows you and your business to get your company’s name out there to millions of people without the hefty price.

As stated previously, everyone on Meet the Drapers is a winner, especially when it comes to invaluable advice. Contestants gain first-hand expertise, insight, and advice from Tim Draper, the Draper family, and VIP guest judges including Scott McNealy, Ronnie Lott, and Adam Cheyer. Learning from successful individuals can help you make your business the next unicorn.

Besides making connections with our judges, you get the chance to network with the entrepreneurs on the show. Many of our entrepreneurs have stayed in touch, worked together professionally, and even became friends! Our Meet the Drapers family encourages all contestants to get to know one another and form connections.