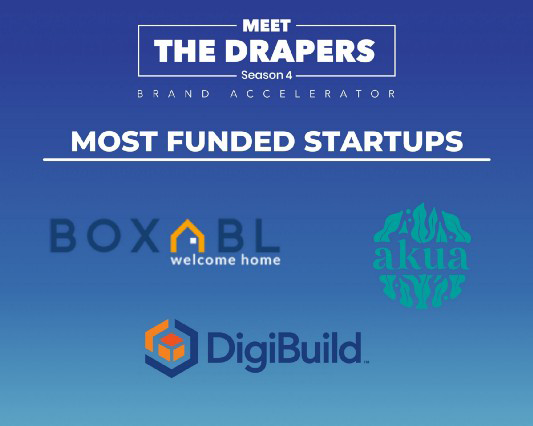 This season, Meet the Drapers was packed with inspirational stories, priceless advice from legendary VCs, and last but not least, featured trailblazing startups — all during a global pandemic. Let’s take a look at some of the most funded startups from season 4.

Akua — this season’s second place winner — is an ocean-farmed kelp food line that is not only delicious and nutritious, but also takes part in combating climate change as kelp is sustainable, regenerative, and reduces the amount of C02 within our oceans. Their invention of kelp jerky and most recently their kelp burgers gained $300K investment from Tim Draper and $1.07 million in crowdfunding within a few months of starting their campaign.

Recently, they won Time’s Best Invention & Fast Company’s World Changing Idea; garnered from A-list celebrities including Sir Richard Branson; and saw e-commerce grow between 20% — 110% MoM in 2020. You can find them in 40+ stores across the United States and hopefully soon in large retailers like Costco and Kroger in years to come.

Winner of Season 4 of Meet the Drapers, Boxabl is revolutionizing the ADU movement by building and delivering foldable homes that take half the time to build and are half the cost. Founded in 2017, this Las Vegas-based company has a goal of producing accessible and affordable homes to people across the globe.

This season, Boxabl won the grand prize of $500K in investment from Tim Draper and gained over $3 million in crowdfunding on the platform, WeFunder. Presently, Boxabl has generated $1 billion dollars worth of reservations on their units and received two purchase orders from the US Federal Government for 156 ADUs totaling $9 million in revenue.

DigiBuild, a blockchain-powered construction management SaaS product, is the only blockchain-powered construction project management platform and allows for collaboration across 50+ stakeholders on one single platform making it seamless and accessible to customers. On Season 4 of Meet the Drapers, the startup garnered over $1 million dollars in crowdfunding and won $100K in investment from Tim Draper.

As of now, DigiBuild has raised $340K in pre-seed capital from blockchain investors and was selected by Shadow Ventures for the ‘Shadow Labs Incubator Program.’ We can’t wait to see what’s in store for DigiBuild in the near future!

4 Ways Crowdfunding Will Turn Your Startup Into A Unicorn
Advice from our Meet the Drapers Winners: DigiBuild’s Top 4 Ways to Take Your Startup to the Next Level